This is the personal blog of Mark Carnall. All the views expressed here are not those of my employer. Fistful of Cinctans is all about natural history museums, zoology and related nerdery. Enjoy. 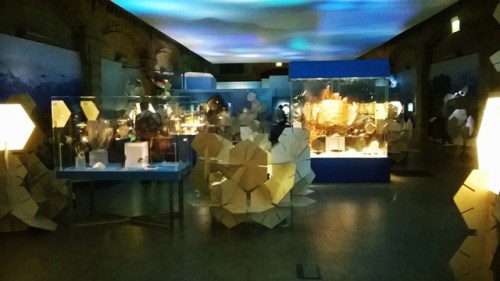 It’s only when I uploaded this image that I noticed the interesting (and probably expensive) sexy ceiling thing goin’ on there. Note the giant hexagons strewn about. This will be important later on.

Last week I visited Coral Reefs: Secret Cities of the Sea at the Natural History Museum, London. I had high hopes for the exhibition as there’s a certain frustration at seeing the same Hollywood Animal exhibitions at natural history museums over and over again. It’s forgivable to think that museums were nothing but dinosaurs, mammoths and fossil humans (as interesting as they are). Did it live up to high (tide) expectations or was it going to be a wash out? READ ON TO FIND OUT NO MORE RUBBISH PUNS I PROMISE.

The short answer is no. No it didn’t deliver what I was hoping for. The problem with most animals that are ‘off the beaten track’, in terms of not having heads, legs, eyes and arms like us is that they are so alien and unrelatable to us mammals that you either have to go for textbook-on-a-wall interpretation that nobody will read to begin to make any sense of it or sellout with some really impressive specimens. This exhibition did neither. 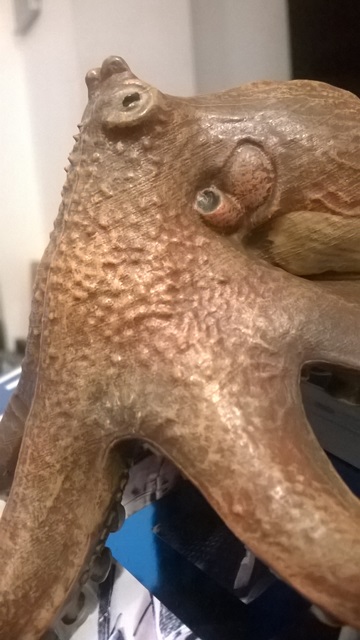 NICE PAPO MODEL OF OCTOPUS. Look at this gorgeous chap. Seriously, I will buy all the plastic models for my wife to throw out the second I die.

I don’t want to be too harsh on the exhibition and of course as a museum professional, I didn’t pay directly to enter the exhibition so I’ve got absolutely nothing to complain about but I’d be surprised if we see any more big invertebrate focused exhibitions for a while. I’d have liked to have seen interactives used in a better way and perhaps a bit more on how weird and wonderful coral reef fauna is. Really not easy to accomplish with standard museum exhbition interpretation tools but that was my hope.

FINAL REVIEW IF YOU CAN’T BE BOTHERED TO READ THE REST: Two plastic octopusses out of five.

* Of course it really helps if big fashion houses and Swarovski sponsor the exhibition as opposed to an insurance company (that does actually have conservation chops) but that’s a blog post for another time methinks.

One thought on “Museum Visit: Coral Reefs: Secret Cities of the Sea at the Natural History Museum London”

This site uses Akismet to reduce spam. Learn how your comment data is processed.