This is the personal blog of Mark Carnall. All the views expressed here are not those of my employer. Fistful of Cinctans is all about natural history museums, zoology and related nerdery. Enjoy.

Museums serve a wide range of research visitors and a lot of the working day can just be trying to schedule them all in! However, with rare exception, we get a lot out of the exchange and I managed to find the time to write up a few recent visits including this one about one of the more obscure major groups of animals.

More Than A Dodo 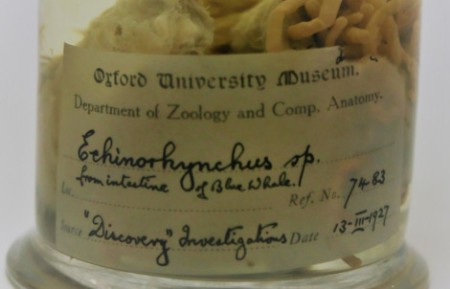 The Museum’s zoology collections contain a dizzying diversity of animal specimens. It is a collection that would take multiple lifetimes to become familiar with, let alone expert in. So we benefit hugely from the expertise of visiting researchers – scientists, artists, geographers, historians – to name just a few of the types of people who can add valuable context and expand our knowledge about the specimens in our care.

Earlier this year, Dr Andrew McCarthy of Canterbury College (East Kent College Group) got in touch to ask about our material of Acanthocephala, an under-studied group of parasitic animals sometimes called the spiny-headed worms.

Although there are around 1,400 species of acanthocephalans, they are typically under-represented in museum collections. Dr McCarthy combed through the fluid-preserved and microscope slide collections here, examining acanthocephalan specimens for undescribed species, rare representatives and unknown parasitic associations.

Another blogpost shamefully recycled from Twitter, here’s the thread if you wanted to check out the thoughts as they were. I spend a lot of time thinking about exhibitions and they’re kind of a silly format for doing any kind of communication I think. There’s something quite quaint about the notion of “We want to say something important so we’ve put some things in boxes with labels and if you don’t come and see it in this specific time period, well you missed experiencing it as it was intended”. Of course there’s online versions of exhibitions and some museums create excellent catalogues but it’s a thing you have to see or it’s gone! The upside to an exhibition as a form of media is it’s hanging in there as an authored and authoritative medium whereas other modes of communication have all but disappeared inside themselves trying to compete with the likes of spotify, social media, bloggers, infinite hours of free video online etc. that’s all but killed off the music industry, printed news, the book industry and TV respectively. In the BIG SCARE QUOTES post-truth era p’raps there’s a value in being so… so analog.

Inspired by the always slick Wellcome Collections going as far as to publish their inclusive design guidelines alongside their online version of the exhibition and creating a lot of noise around their new ‘permanent exhibitions’ that largely eschew the modern penchant for exhibition gimmickry (museums without objects, objects covered up, exhibitions of light or coloured fog or post-it notes or…)  I tried to put my thoughts about the best kinds of museum exhibitions in my humble opinion. END_OF_DOCUMENT_TOKEN_TO_BE_REPLACED

It’s been a funny week in museums. First of all Museum professionals are reportedly murdering each other over the new definition of museums and then this tweet about crediting museum curators in the press kicked off a days worth of slightly warm exchanges about who deserves credit for exhibitions. It would seem that the museum sector is struggling a bit with fundamental definitions so what better time to dust off a 2013 blogpost I wrote whilst at UCL on Will a museum studies degree help you get a job in a museum? Originally posted here all images (c) UCL.

We get asked the above question at the Grant Museum frequently by aspiring museum professionals and volunteers and it’s a question that isn’t simply answered. I can’t say that my view on whether it helps or not is the definitive view but as an employer (sadly not as often as we’d like to be) here’s my personal thoughts on whether or not it helps. END_OF_DOCUMENT_TOKEN_TO_BE_REPLACED

As someone whose job is involved with information management and preservation, modern social media is seemingly engineered to fuck this up as much as possible. Google isn’t good at digging through social media platforms (even its own ones) and Twitter’s search tools are abysmal as anyone who has tried to find something they know they saw fleetingly scroll past can testify. In order for easy reference and retrieval before it becomes irretrievable kipple, I’ll be putting some of this stuff here starting with this mini thread on Museums and… Free Admission. END_OF_DOCUMENT_TOKEN_TO_BE_REPLACED

It’s been a while, I had a voluntary time away from writing and then an involuntary time away from writing and a stock of things I need to get out of my head and onto the page has grown. In order to satisfy some imaginary standards I set myself for content production here which predictably I haven’t stuck to, I’ll be shifting stuff I’ve written from elsewhere to here including blog posts for other institutions, stuff that only exists in hard copy and stuff from social media.

As someone whose job is involved with information management and preservation, modern social media is seemingly engineered to fuck this up as much as possible. Google isn’t good at digging through social media platforms (even its own ones) and Twitter’s search tools are abysmal as anyone who has tried to find something they know they saw fleetingly scroll past can testify. In order for easy reference and retrieval before it becomes irretrievable kipple, I’ll be putting some of this stuff here starting with this mini thread on Museums and… Brexit. END_OF_DOCUMENT_TOKEN_TO_BE_REPLACED

A historic decision was made this week at the International Museums, Archives, Libraries and Heritage Committee (IMALHC) annual congress meeting in Oslo by international representatives of the global heritage sector. IMALHC members voted to stop giving deadmedia (newspapers, radio and television broadcasting) a free ride in order to let them die with “a bit of dignity left”. This welcomed decision is expected to be respected and actioned by heritage organisations in the coming year. The decision taken is to stop giving free time, resources and assets to deadmedia organisations to run cutesy stories or prop up the same three documentaries they keep making.

Brione Poplio, IMALHC member and Curator of Massmedia at the Museum of Communication, said “As an expert on obsolete media it was a difficult decision to pull the plug on creative industry stablemates. However, it’s been a rather one-sided relationship for the last hundred years or so. We waive filming and reproduction fees, give up our already limited staff time, help with their research and they run the same headline about ‘discovering lost artefacts in dusty basements’. It’d almost be offensive if anyone was actually reading listening or watching”.

Cereza Bayonetta, Head of Brighton Archives Centre added “We had the perfect example of this last month. We gave up two days of time and museum space for BBC filming How Old Is Your Celebrity Caravan and got three likes on our ‘we’re on the telly’ tweet. A local popular LGBTQ+ podcaster happened to mention they came to the centre in passing and our Instagram follower quadrupled overnight. They also got the name of the institution correct, unlike the BBC”.

Ian Dunlop, Director of Wenlow Museum of Horticulture said “Exposure is cheap these days. I was on the Today programme recently talking about hoes and I couldn’t even buy a coffee in my local cafe with the exposure. The young barista didn’t even recognise it as valid currency at first!”.

Jenny Jenson, Head of Marketing, Communication and Innovation at the Museum of Rocks and Dairies, offered: “We’ve got a live webcam of a creaky floorboard that once belonged to Charles I that has more viewers than at least three national newspapers have circulation figures. If we wanted to get a message out, we’d put a Post-It on the floorboard to be honest”.

Some heritage professionals welcome the decision to allow traditional journalism to end with some dignity such as Mia Norwich, Head of beeswax at GYRATE!: “When the lights do finally go off and the doors do finally close on the fourth estate and traditional journalism let’s remember them for speaking truth to power, for making world leaders quake in their boots. For holding those at the top accountable. Let’s make the memory of dead media one of these messages, not the papping celebs on the milk run in their PJ’s or the giving platforms to trendy fascists that they’re known for nowadays”.

Not everyone was unconcerned for the future of popular culture, newsmaking and communications though. N’Gari Hattershank, Chief Senior Junior Librarian from the Potter’s Library, warned: “Obviously, the Internet and social media remains the Wild West when it comes to ethics, checks and balances and accountability. This is a slight change to traditional journalism which has these ethics, checks and balances largely ignored but at least on paper”.

Wanted to put this together even since I heard about the phenomenal Journal of Geek Studies. Really happy to see it out in the wild!

Magic the Gathering (MTG) is a popular trading and collectible card game, first published by Wizards of the Coast in 1993. Although the game now spans many formats and game types, the core concept pits two players “Planes-walkers” against each other, drawing power (mana) from plains, swamps, mountains, forests and islands to summon creatures and cast spells to battle and defeat opponents. The game has a complex and ever evolving set of rules. Wizards of the Coast regularly release new sets and blocks introducing new cards, mechanics and lore to the rich Multiverse, the planes of existence that Planeswalkers can travel between, that makes the games setting.

Fistful Of Cinctans
Create a free website or blog at WordPress.com.